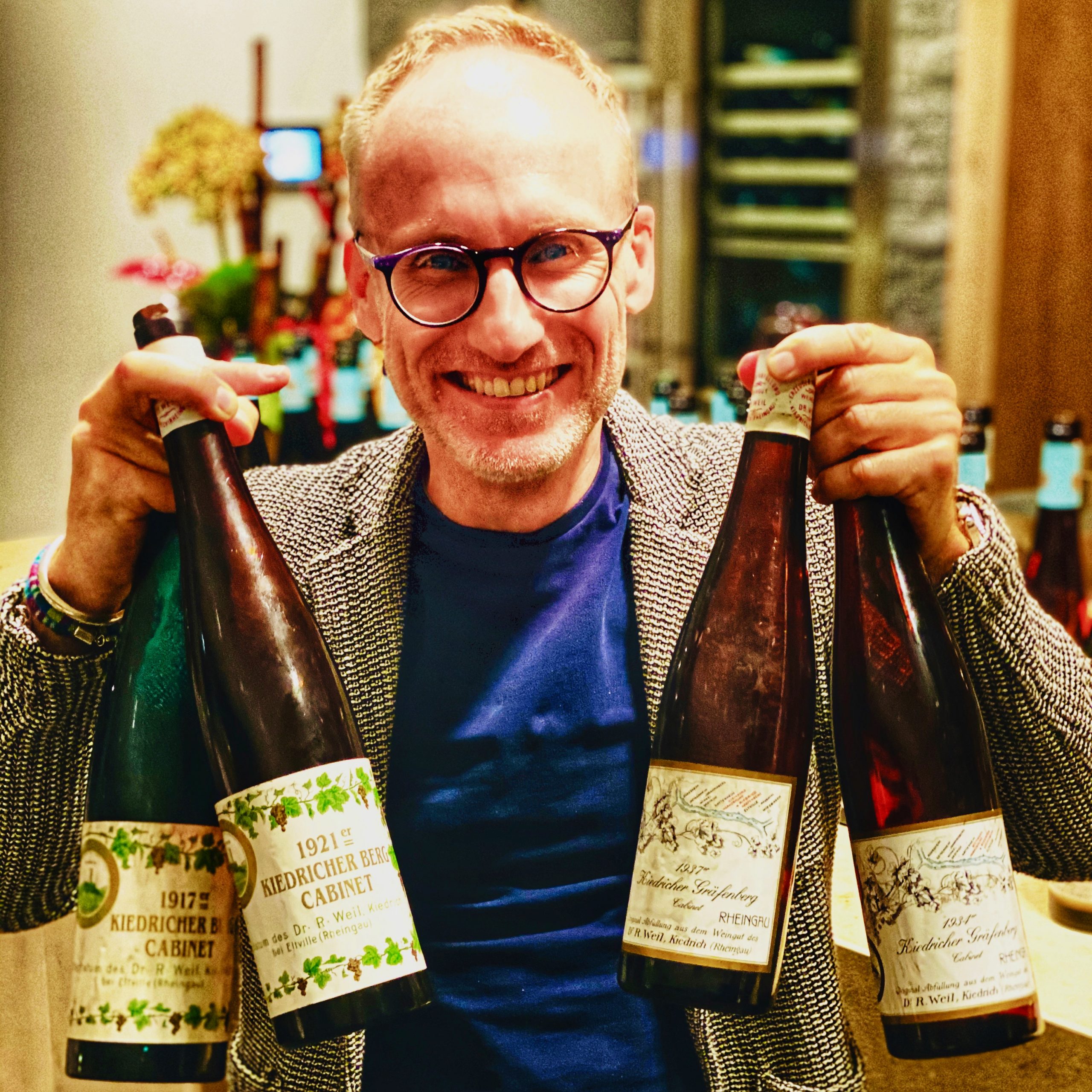 Have you ever tasted a Riesling from 1917? From 1921? I tried even more liquid history tonight, and I was incredibly impressed. Wilhelm Weil from Robert Weil winery invited us to an exceptional tasting with a stunning lineup of wines. His selection included not just all vintages of Kiedricher Gräfenberg 2019-2007 but also magnificent historic vintages such as 1917, 1921, 1934, 1937, 1947 and 1949.

Although I have the luck to enjoy old vintages from time to time, this was a special evening. I mentioned before, that wine is a telescope into our history. These wines deserve more than a short note—just some brief remarks about the fascinating historic wines which came into my mind.

1917 – an absolute beauty. A perfect bottle. My favourite and the best bottle from this vintage even Wilhelm Weil has ever tasted. Fresh, vibrant, kind of minty notes with incredible focus and full of energy. The bouquet spectrum offered citrus peel, dried peach, lime cordial and a touch of white blossom. Fresh acidity and a pleasant, delicate phenolic added tension and focus to the wine. It showed delicate lime, mint and smoke in the finish. A sheer wonder of nature produced in a year when millions of young men died at the frontlines of the First World War.

1921 – This bottle had by far not the vitality of the 1917 and was over its peak. Sherry notes with shoe polish. But – hey – the wine also showed a nice lemon fruit core, and it is 99 years old. I emptied the glass with pleasure.

1937 – slightly paler gold – was fresher, more restraint with apricot peel, lime, beeswax. Crisp, precise, and focused. Long lingering and full of life. Nevertheless, another year of shame for Germany. It was the last vintage before the Nazi regime extinguished the Jewish wine trade.

1947 – fresh, lime, toast, petrol, quince and touch of herbs and greens. Intense and elegant. A beauty produced mostly by women as many men still have been imprisoned after World War II.

1949 – lovely to enjoy now. Orange peel, quince, dried herbs and blossoms, petrol, beeswax. The grapes were harvested when the Federal Republic of Germany was founded.

By the way, the bottles were re-corked at the winery in the 1990s. This is particularly important for old wines when the original cork has for example become brittle and inelastic over the decades.

The term ‘Cabinet’ on their label stands for the “natural purity” and the special quality of the wine. The expression comes from the French and means treasure chest. It originally refers to the cellar compartments where the wineries used to store their best wines. The first of these treasuries were created in the first half of the 18th century in Eberbach Monastery and Vollrads Castle.