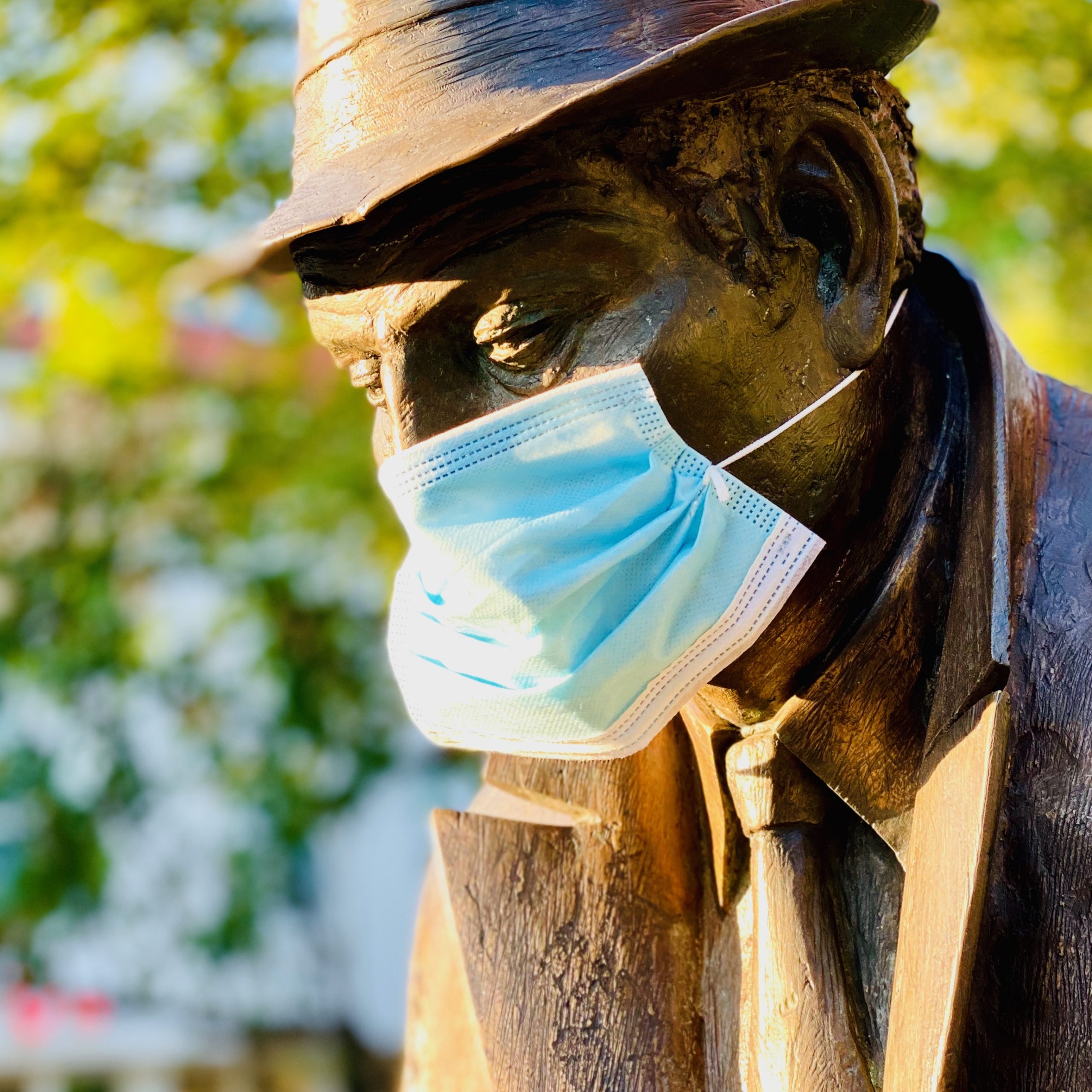 Crises are catalysts, particle accelerators. They catapult us out of our comfort zones – individuals and societies. They bring to the surface what has already grown in us. They reinforce trends. They sweep away much of the old. The Plague ended the Middle Ages and laid the foundations for the Renaissance. It shook the authority of the Church and made people think about themselves and this world.

And COVID-19? How will this virus affect us and our future? For the better? For the worse? And all of this permanently? We don’t know. And yet, fault lines are emerging that show distinct trends. And they suggest that we should already start thinking anew today, making new decisions, leading and communicating differently.

So let us step into our virtual time capsule.

We will arrive on May 21, 2023. It is an unusually warm Sunday in Stuttgart. People are enjoying the sun. Alone. In groups. Without restrictions. The swimming pools are already open. COVID-19 is still there. It will always be there. But it has become controllable. Researchers in Germany, France and the U.S. have found three different vaccines. We have stopped the pandemic. But it has transformed us. It has generated similarities, sharpened differences. It has created winners and losers. It has thrown light and shadow; lifelines bent and straightened. New buzzwords spread. Home office and homeschooling, super mortality and R-factor, toilet paper and baker’s yeast.

Health as a Megatrend

It’s been three years now. We had halted our world to protect the weakest in our society for the first time in human history. This primacy of humanity still resonates in us. Even before the crisis, health was one of the megatrends in our postmodern Western societies. We increasingly shopped vegan, gluten-free and without additives. We measured and improved our bodies and our sleep with fitness tapes and apps to the nano range.

Now, we have gained the Mindfulness. Keeping our distance as an act of responsibility has become part of our everyday life. We now voluntarily and decentralised share our data to warn us of potential infections. In September 2021, Apple released his Watch 8 with a permanently installed so-called “iShield”. The green-glowing virus shield logo on the watch crown is considered a statement and status symbol of the healthy “data donors”. It confirmed third law of the science fiction author Arthur C. Clark: “Any sufficiently advanced technology is indistinguishable from magic.”

Others, however, see not the magic, but the Wizards’ Apprentice at work. For example, all those anti-vaccinationists, conspiracy theorists and ” disconnected people” who have settled in their filter bubbles in times of uncertainty, fear of the future and weak political leadership. Despite the fake news filters of social media, rumours continue to circulate.

And after all, not all that promises good things is good. On the occasion of the 75th anniversary of North Korea, the government has developed a health bracelet for its population. It measures heartbeat, blood pressure and dopamine release in real-time and sends the data via radio to the “Great Leader”. In this way, those people can be reliably “retrained” who do not have their hearts beat faster with joy at the sight of their beloved country father.

However, after rejoicing, many people do not have any sense of joy either in the industrial western nations. The global economy lags far behind the figures for 2019, even if it is recovering faster than the forecasts had suggested. Despite the demand for national autonomy to ensure the supply of vital goods, the global division of labour has not been abolished. The pressure to produce efficiently and cost-effectively remains too high.

Unemployment has risen – in some regions and industries even drastically. The traditional trade fair, event and tour operators, hotels, airlines and restaurants are still struggling with the consequences of the shutdown. Bankruptcies continue to increase, and the number of players continues to decline. The economic downturn aggravates the danger of further schism in society. Even if the fault lines no longer necessarily run between the luxurious Harvestehuder Loft and the decent two-room apartment in Marzahn. Rationalisation and job losses have also hit the upper-middle-class hard.

On the other hand, employees benefit from greater flexibility in the home office. Many companies have followed Twitter and have opened up working at home to their employees as a permanent solution. Although gender inequality once feared has not developed, the home office as a whole has not led to more fairness either. It is still not possible to work at home for a bus driver, a construction worker or a nurse.

Digital Disruption as an Opportunity

Darwin’s principle “Survival of the Fittest”, however, offers some hope. For it is not so much the strongest that survives but rather the fittest—the one who adapts best to the new conditions. Many entrepreneurs have seized their opportunities. They follow a specific purpose, think disruptively and act flexibly.

Digital is booming – driven mainly from the USA and Asia. Companies such as Amazon, Google and Alibaba are investing massively in their platforms and infrastructures to prepare them for the next generation of digital services and networks. In six months, the 37,000-km submarine cable around Africa is scheduled to go into operation and better connect the continent to the Internet. The project is led by a consortium around Facebook.

Digital communication has also narrowed the distance of producers and their customers. Winemakers taste their wines in online rounds together with wine lovers around the world, E-Cooking competitions have established themselves as a culinary alternative to popular E-Sports.

Virtual is the new “Live”

The race for the best digital alternative to traditional live events has resulted in entirely new forms of face-to-face communication during the crisis. Augmented-reality applications enhance trade fairs, concerts, theatre and presentations with breathtaking virtual dimensions of experience. Lower-income and less hesitation to meet digitally also among the “non-digital natives” have strengthened this trend.

And our children also benefit. In 2019, the generally enforced homeschooling had disclosed the digital deficit of the educational system in Germany. Since then, the state governments have invested massively in the digitalisation of schools and have also taken advantage of external support. Not least thanks to Amazon’s new initiative “Amazone Homeschool Prime” also boys and girls from the lower social class now also have better access to knowledge and information.

At the same time, a global-local awareness has grown, which the retired economics professor Mike Veseth has described as “glocal”. It is part of a culture of focus and solidarity now – to consume less, better and authentic. During the crisis, people have been rediscovering their close neighbourhood. A visit to your favourite Italian around the corner, buying flowers next door and a holiday in Bavaria rather than in Bangkok – all this gives us a positive feeling and has become more relevant again. We focus on and use our resources more efficiently – our money, our time, our attention – and our environment.

We are more aware of our responsibility than ever of climate change, oceans full of plastic and the firestorms at the other side of the world. Not only photos of the coffins in Bergamo have burned into the global consciousness.  We also remember the smog-free view of the Himalayas and the crystal clear water in the canals of Venice during the shutdown. Technological progress also benefits our ecosystems. The infrared drones and robots which monitored people’s distances in Singapore during the crises are now searching for orphaned koalas in Australia’s fire zones.

Suddenly the space-time alarm of our capsule rings. We have to go back to the year 2019.

Friday, May 15, 2019. Back in the here and now. Back in the crunch of the crisis. Time to think and reflect. Do we like what we have seen in 2023? Certainly not all of it. But we have seen much, which should give us hope. It is up to us how to live in 2023. We have the power to shape that future. With an approach to think, structure, lead and communicate different. My next blog post will provide more on this.

About the inner strength in the crisis